What caused the big bang ?

We will first have a look at the evidence of the big bang and why it’s been widely accepted so far.

The Big Bang is an idea about the history of the Universe, the origin of the universe, the history of space and time and matter (“stuff”) and energy. The Universe is about 13.8 billion years old and from observations we make using telescopes we can tell that the Universe was very small 13.8 billion years ago. It was born in a massive expansion that blew the space up like a gigantic balloon.

Edwin Hubble concluded that galaxies are drifting apart in 1929 from analysis of galactic redshifts. This was an important observational evidence for an expanding universe. In 1964, the CMB (Cosmic microwave background) was discovered, which was crucial evidence in favor of the hot Big Bang model, since that theory predicted the existence of background radiation throughout the universe.

Further, we don’t see any objects obviously older than 13.8 billion years, suggesting that our universe came into being around that time. All of these things put the Big Bang on an extremely solid foundation making it the most widely accepted and enormously successful theory. 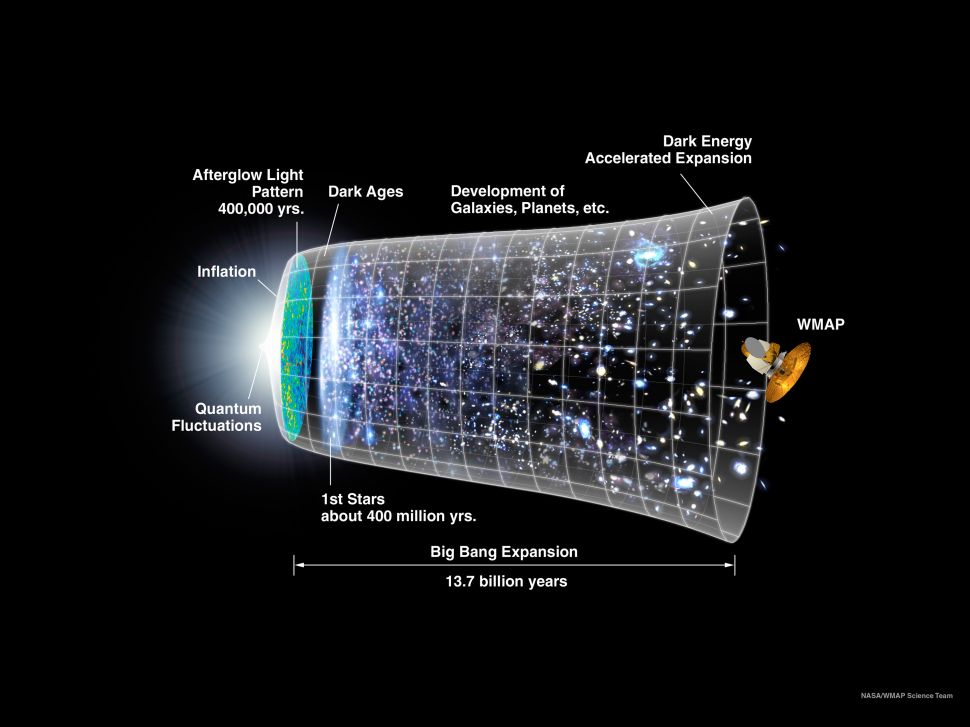 Big Bang and the universe

This graphic shows a timeline of the universe based on the Big Bang theory and inflation models. (Image credit: NASA/WMAP).

Problems with the big bang

Traditional Big Bang theory posits that our universe began with a singularity — a point of infinite density and temperature whose nature is difficult for our minds to grasp. However, this may not accurately reflect reality, researchers say, because the singularity idea is based on Einstein’s general theory of relativity which fails at the quantum level. To explain the origins of the universe, we have to take into account, quantum mechanics because General relativity applies only to macroscopic world and fails at the quantum level. So the very beginning of the universe remains pretty murky which disqualifies big bang to be a theory that can explain everything.

Except there are a few frustrating pieces that don’t seem to fit the mystery puzzle of the origins of the universe. For one thing, evidence from the cosmic microwave background suggests that the universe is flat, even though the Big Bang predicts that the universe should most likely be curved. There’s also the fact that everything in the universe seems to be about the same temperature, even though some parts of the universe are so far apart and the age of the universe is so young that there’s hardly any chance these parts were ever in contact with each other to even out their heat. Finally, the violence of the singularity-style Big Bang should have produced ultra-high-energy particles called magnetic monopoles, but so far, these are nowhere to be found.

Hence to address this issue, scientists now propose a new theory called the inflation theory which answers the question, what happened before the big bang ?

Inflation theory in a nutshell

Inflation theory relies on something called vacuum energy. The empty space that we see, is not empty at all. Even when no matter or even radiation exist, as the inflation theory predicts was the case before the Big Bang, the vacuum of space is still full of energy thanks to pairs of quantum particles that constantly blink in and out of existence. That energy made the empty universe expand at an exponential rate, enlarging it by a factor of something like 1026 in a fraction of a second. As it expanded, fluctuations in vacuum energy left the fabric of space uneven, with random spots where the energy density was slightly higher or slightly lower than average. Eventually, all that energy decayed into matter and radiation that existed in the super-hot, still-expanding state predicted by the Big Bang.

This fixes a lot of the problems with the Big Bang theory in its original form. Inflation predicts a flat universe, and the speed at which it happened allows for everything to end up at the same temperature since it was possible for every point in the universe to have once been in contact. Inflation also says that magnetic monopoles may have existed prior to expansion, but their density would have dropped to undetectable levels afterward. Plus, those fluctuations in the vacuum energy density nicely explains how stars, galaxies, and galaxy clusters formed. If it weren’t for those random clumps of extra energy, humanity would never have existed.

If your knowledge of the Big Bang starts with a singularity, it may be time to revise that old fable. Here, we’ll start: A long, long time ago, before matter or radiation existed, energy bound in the fabric of space made everything expand by a trillion trillion times in less than the blink of an eye. Soon, that energy turned into matter and radiation, which eventually coalesced into stars and galaxies — and the rest is history as we all know.