Trends and developments in communication technology and the internet 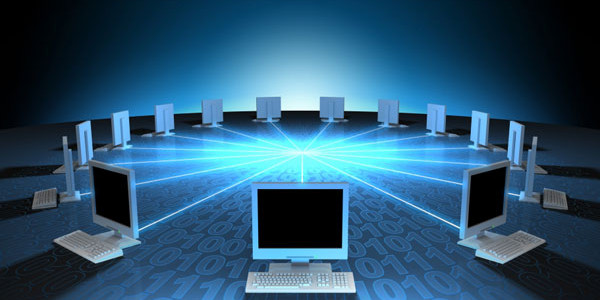 There has been a dramatic increase in the data transmission rate and simultaneously also a decrease in the number of bits transmitted/dollar due to the advent of various advanced communication technologies and effective and improvised physical media used for data transmission.The fiber capacity which was close to 20 Gbps by 1996 has reached to 6.4 Tbps by 2007 and still growing very rapidly. This shows the rate at which technological advancement took place. One of the reasons for this growth is the popularity of the internet which led to the growth of the internet traffic over time. This led researchers and engineers to develop more improvised and advanced communications technology to meet the growing needs.

The Internet, sometimes called the “Information Superhighway,” is a worldwide, publicly accessible series of interconnected computer networks that transmit data by packet switching using the standard Internet Protocol (IP). It is a “network of networks” that consists of millions of smaller domestic, academic, business, and government networks, which together carry various information and services, such as electronic mail, online chat, file transfer, and the interlinked web pages and other resources of the World Wide Web (WWW).
A machine on the internet is called a host. Initially host used to be a unique machine on the internet. However, this quote no more holds good and it has changed over the past few years as now, a single machine can act like multiple machines and can have multiple domain names and IP addresses. This technique is called virtual hosting.Virtual web hosting is often used on large scale in companies whose business model is to provide low cost website hosting for customers. The vast majority of such web hosting service customer websites worldwide are hosted on shared servers, using virtual hosting technology.
Many businesses utilize virtual servers for internal purposes, where there is a technology or administrative reason to keep several separate websites such as customer extranet website, employee extranet, internal intranet, intranets for different departments. If there are not security concerns in the website architectures, they can be merged into a single server using virtual hosting technology, which reduces management and administrative overhead and the number of separate servers required to support the business.
IP forecast :

Here are some of the anticipated forecasts related to the internet :

1) Internet traffic is supposed to double every 2 years through 2011.Total IP traffic will nearly increase by five times in the 5 year period from 2006 to 2011.

There are various applications and technologies which have become popular and are widely used. These are as follows :-

2) Video over IP : Its the protocol optimized for the transmission of high quality videos over th internet or other packet switched networks.

3) IPTV : IPTV (Internet Protocol Television) is a system where a digital television service is delivered by using Internet Protocol over a network infrastructure, which may include delivery by a broadband connection. A general definition of IPTV is television content that, instead of being delivered through traditional broadcast and cable formats, is received by the viewer through the technologies used for computer networks.

5) Overlay networking : An overlay network is a computer network which is built on top of some another network. Nodes in the overlay can be thought of as being connected by virtual or logical links, each of which corresponds to a path, perhaps through many physical links, in the underlying network. For example, many peer-to-peer networks are overlay networks because they run on top of the Internet. Dial-up Internet is an overlay upon the telephone network.
Overlay networks can be constructed in order to permit routing messages to destinations not specified by an IP address. For example, distributed hash tables can be used to route messages to a node having specific logical address, whose IP address is not known in advance.
Overlay networks have also been proposed as a way to improve Internet routing, such as through quality of service guarantees to achieve higher-quality streaming media. Previous proposals such as IntServ, DiffServ1, and IP Multicast2 have not seen wide acceptance largely because they require modification of all routers in the network. On the other hand, an overlay network can be incrementally deployed on end-hosts running the overlay protocol software, without cooperation from ISPs. The overlay has no control over how packets are routed in the underlying network between two overlay nodes, but it can control, for example, the sequence of overlay nodes a message traverses before reaching its destination.
TCP/IP :
TCP/IP is a suite of protocols which has 5 layers and each layer has a predetermined function. TCP is a reliable transfer protocol which corresponds to the transport layer in the OSI model.

The layers of TCP/IP model are as follows : 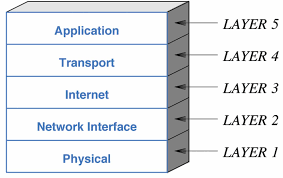 4) Data link layer : It responds to service requests from the network layer and issues service requests to the physical layer.This is the layer which transfers data between adjacent network nodes in a wide area network or between nodes on the same local area network segment. The data link layer provides the functional and procedural means to transfer data between network entities and might provide the means to detect and possibly correct errors that may occur in the Physical layer. Examples of data link protocols are Ethernet for local area networks and PPP3, HDLC4 and ADCCP5 for point-to-point connections.

This was about the 5 layers of the TCP/IP model.