Entire script of the famous show Game of Thrones revolves around the arrival of the winter. From the season one to the season seven, the characters there continuously prepare themselves for the winter. Finally the winter came in the last season and it lasted for only few episodes of that season. This has disappointed many GOT fans including me. We wanted to enjoy that entertainment for a few more seasons and hence hoping for a complete season dedicated to the winter. However, that was a drama but in reality we would have also prayed for the shortest winter season if ever we had to face it.

The winter of the Westeros has taught us an important lesson, no matter how short the winter is but it is always devastating. The winter brings into play all monstrous characters like the Night King, the Mad Queen. Winterfell was destroyed, King’s Landing was burnt into ashes, millions of people died. However, in the end it gave rise to the new kingdom and the new hopes. This drama has a lot more similarities with the economic world.

The recession is coming for all of us and this time it is for real.  Do you want to sit back and wait for its arrival or do you want to prepare yourself for it. The decision is yours. Yes, some time is still left.

In earlier days, only the economists and the pundits used to predict the recession. And we, the  common people, came to know about it only after its arrival. We would believe in it only after losing jobs and losing money invested in stocks. We have heard the story of one of the former governor of RBI, how he predicted the 2008 recession in his paper written in 2005. We could also see so many economists boasting on the internet about how they were the firsts who predicted the next recession.  With all due respect to their knowledge and their abilities, now the time has changed and we the common people with the help of machine learning algorithms can also forecast the next recession!!  We are going to see that now !!

In the previous three articles we tried various regression techniques and the time series forecasting algorithms like the Prophet from the Facebook. However, we realized that the stock market problem is too complex to be solved by all these techniques. Hence, in this article we are exploring the neural networks to find out if it could do the realistic predictions.

Unlike von Neumann model computations, artificial neural networks do not separate memory and processing and operate via the flow of signals through the net connections, somewhat akin to biological networks.

These artificial networks may be used for predictive modelling, adaptive control and applications where they can be trained via a dataset. Self-learning resulting from experience can occur within networks, which can derive conclusions from a complex and seemingly unrelated set of information.

Let’s try to understand a neuron, a neural network and a neural network computing algorithm using a logical AND gate. Following diagram is a representation of a logical neuron. It has two inputs x1 and x2 which accepts binary values i.e either 0 or 1. The neuron has one biased node +1. Let’s say our target function is y = x1 AND x2.

In the beginning of the computation, we need to have a design of our neural network ready and we also need a predefined hypothesis function which is generally a summation of product of input values and the weights associated with them. Initially the weights w1, w2 and w3 are unknowns.

In the next step we train the neural network by feeding it sample data. In our case to train it to behave  like an AND gate we will feed it following data.

Here, we have constructed one of the fundamental operations in computers by using a small neural network rather than using an actual AND gate. Neural networks can also be used to simulate all the other logical gates. The same neuron can be trained to behave like a logical OR gate. In that case the computed weights may be w1 = -1, w2 = 2, and w3 = 2. The hypothesis will be hɵ (x) = g ( -1 + 2 * x1 + 2 * x2). If you write a truth table for this new hypothesis function then you will find that it is exactly behaving like a logical OR gate.

Now, let’s get back to our riddle of stock market prediction. In this exercise we are going to explore a neural network algorithm called “LSTM” . Long short-term memory (LSTM) is an artificial recurrent neural network (RNN) architecture used in the field of deep learning. Unlike standard feed forward neural networks, LSTM has feedback connections that make it a “general purpose computer” (that is, it can compute anything that a Turing machine can).

A common LSTM unit is composed of a cell, an input gate, an output gate and a forget gate. The cell remembers values over arbitrary time intervals and the three gates regulate the flow of information into and out of the cell.

LSTM networks are well-suited to classifying, processing and making predictions based on time series data, since there can be lags of unknown duration between important events in a time series.

Unlike the previously tried time series prediction algorithms where we directly fed the stock market data to the algorithm, in this case for LSTM we need some preprocessing of the stock market data. The input dataset becomes the prediction boundary for the LSTM. While making predictions It cannot come up with figures which are outside of the input dataset. For example, if the lowest value in the input dataset is 600 points and the highest value is 39000 points then the future predictions will be in the range of 600 to 39000 only. If we are doing forecast for next ten years then this will never be the case as in long run the stock market always goes up. Hence, we have to transform the stock market data in the form of relative increase and decrease percentage with respect to the previous close value. By doing this we have nullified the range boundary. As we are playing with the relative data now, virtually we do not have any boundary. Now the LSTM can make real predictions using the relative percentage data. Let’s understand this with the help of following example.

Table A shows the stock market dataset. Table B is the transformed version of table A.

Now, let’s try this neural network solution on the real data. We can download it from BSE India – Archives . I have downloaded the data from year 1989 to the current date. The downloaded data sheet has total five columns; Date, Open, High, Low and Close. For simplicity we are deleting three columns Open, High and Low from the data sheet and keeping only Date and Close columns.

Following is the complete python code. The code is commented enough to explain each and every aspect of this problem. Copy paste it on your python IDE and run it to see the predictions in graphical format. 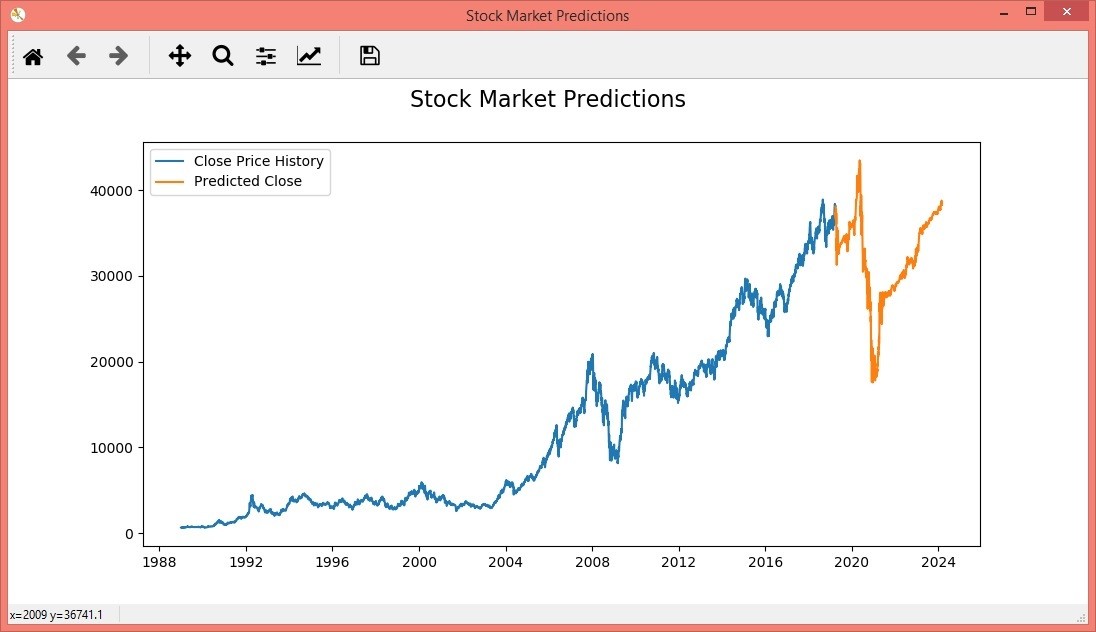 How to read the above image?

X-axis of the graph shows the dates from year 1989 to year 2025 and the Y-axis shows the market closing price.

What are the predictions ?

2. On 18th December 2020 the stock market will reach to its lowest bottom.

3. The economy will be in recession from the second quarter of 2020.

4. The stock market will take another five years to recover from the recession.

5. Forget about the returns from the stock market just worry about safeguarding your investments!!

After looking at the predictions I am happy and worried now. I am happy because we could find out a technique using ML algorithms to predict a recession. I am worried because we will really have to face this scary phenomenon.

All these predictions are done using only one dimension that is the Time. As wise men say the Time has answers for all the queries. Here, we used  Time to predict the coming of the next recession. But let’s keep the philosophy aside and come to the reality. And the reality is that there are many dimensions including the Time which govern the stock market behavior. We must not ignore them. The above predictions might not be accurate, the dates may differ but the bottom line won’t change. The bottom line is that the recession is coming.

The world had generated the most wealth in the decades of 80s , 90s and the early 2000s and then came our generation who started earning in the decade of 2010. We all are aware of the lackluster performance of the stock market in the last decade and all of our predictions are showing us a gloomy picture ahead. Our generation is cursed!!, we have started earning in the trough of a long term economic cycle. Let’s accept, we cannot generate wealth using the stock market now. We should find out some other ways. May be something shiny, something glittery might make us wealthy. May be the stocks we own need a golden touch to make us rich. Yes, a golden touch. But remember the golden touch was a curse for the mighty king Midas. However, can it be a boon for us? Let’s find out that curse in the next article “The Golden Touch”. Till then happy predicting…..